The Goblins’ Song (from “The Hobbit”) (New College School Choir)

Voices in the Tide [concert recording at The Purcell Room, London]
The Kegelstatt Trio with Vanessa Williamson (mezzo-soprano) 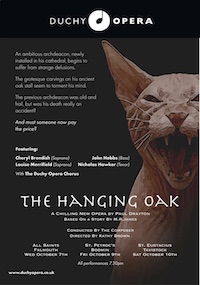 Audio extracts from The Hanging Oak:

The libretto (by the composer) is based on M.R.James’s ghost story The Stalls of Barchester.  An ambitious clergyman, newly installed as the archdeacon of his cathedral, begins to suffer strange delusions.  The maidservant Jane knows more than she should, and the grotesque carvings on his ancient oak stall seem to have the power to torment him.  The previous archdeacon was old and frail but was his death really an accident?  And must someone now pay the price?

In his candlelit study the brooding archdeacon reads the obituary of his predecessor.

The maidservant Jane tells her husband that they are to have a child.

While Jane and her husband find happiness a dark shadow begins to fall over the archdeacon and his sister.