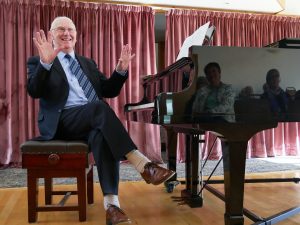 Welcome to my website!  I am a composer and pianist who has been lucky enough to work in a wide range of musical genres, but it is the uniquely fascinating sound of the human voice that always draws me back.  It can touch the listener in a way that nothing else quite does, and to a composer it offers endless possibilities.

Audio examples of my work are available here.

Information on my book “Unheard Melodies” can be found here.

Paul’s new arrangement of Vaughan Williams’s “THE LARK ASCENDING” for violin and choir has now had several performances in Sweden and Denmark. The score is published by Oxford University Press. The recording by Chandos in June 2019 with the Swedish Chamber Choir, conducted by Simon Phipps and the acclaimed violinist Jennifer Pike, has now been released. it was chosen by Radio 3 “Music Matters” on November 16th as “Disc of the Week” and described as “ingenious and highly effective“.

“THE PASSION OF CHRIST AS TOLD BY MARK THE EVANGELIST” was broadcast on Good Friday, April 19th, 2019 on the BBC Radio 3 “Afternoon Concert”. It is performed by the BBC Singers, with soloists, and organist Richard Pearce. The conductor is Martin André. Listen to excerpts here.

A new song-cycle “ONE NIGHT….” for tenor and piano received its premiere in Wells Cathedral with  Edward Goater (tenor) and Christopher Sheldrake (piano).

“SIR AGLOVAILE AND THE GHOST-GIRL”– a Gothic melodrama for SATB chorus and harp. It was performed by the English Baroque Choir, conducted by Jeremy Jackman, in “A Halloween Special” at  St. Pancras Church, London

A new anthem “FOR REMEMBRANCE” – was performed by the Cathedral Choir, Truro Cathedral Evensong and was published by Oxford University Press.

A new carol “IN THE ENDING OF THE YEAR” – was premiered  by the Swedish Chamber Choir, Gothenburg, Sweden

The “ANTIQUE SUITE” for 10 brass was played in Florence by the brass ensemble of the orchestra of Maggio Fiorentino in the Piazza della Signoria.

Meanwhile various projects are under way.  Plans are taking shape for a new opera, to follow in the footsteps of The Hanging Oak.